The Origins Space Telescope (Origins) will address some of our most compelling questions: "How did we get here?", "How did the Milky Way and other galaxies form?", and "How do life-bearing planets form?"

Origins will unveil the hidden side of galaxy and black hole evolution, trace the trail of water from molecular clouds to proto-planetary disks, revolutionize our understanding of planetary system formation, and complete the census of the outer reaches of the Solar System. 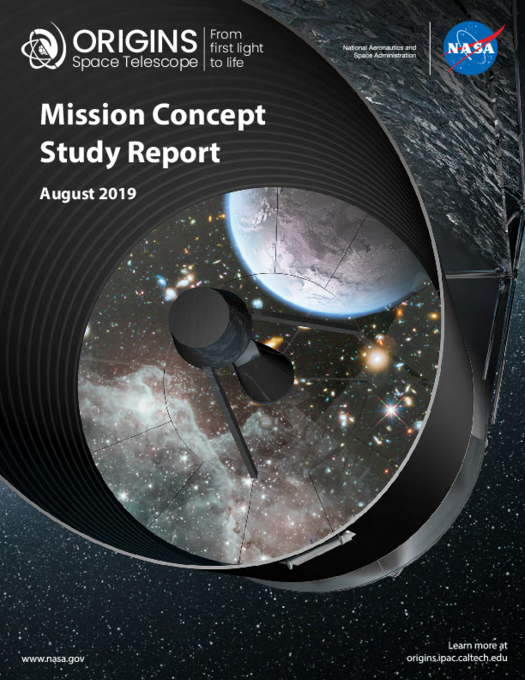 The science goals and associated measurement requirements for Origins have been established by a community-based Science and Technology Definition Team (STDT). The STDT is supported by a NASA Center Study Office based at NASA's Goddard Space Flight Center, with partners at several other NASA Centers and industry teams. The Origins Space Telescope study team has developed a scientifically compelling, executable concept and just delivered its final report to NASA.  A PDF copy of the report is available here, or via this direct link to the Center Study Office web page.

The Origins Space Telescope featu​red in a special section of journal on astronomical telescopes, instruments and systems (JATIS)

The Origins study team has delivered its final report to NASA.  Get your own copy now.

Origins at the 235th AAS meeting

Origins had a large presence at the Winter AAS meeting in Honolulu, including a set of 12 posters in session 171 on Sunday, a Special Session on Monday morning with 11 talks about the mission and the science of Origins, and a presentation at the NASA Decadal Studies session on Wednesday afternoon. See the full list of talks and posters on our News page.

We've have an on-line FAQ page!  Take a look, and submit a question about Origins for us to answer.

Through deep and wide spectroscopic surveys, Origins will reveal the complete history of star formation, metal enrichment and supermassive black-hole growth in galaxies across cosmic time.

With sensitive and high-resolution far-infrared spectroscopy, Origins will illuminate the trail of water in our Galaxy from star-forming disks to habitable planets.

Searching for Biosignatures in Nearby Exoplanets

By obtaining precise mid-infrared transmission and emission spectra, Origins will assess the habitability of nearby exoplanets and search for signs of life.