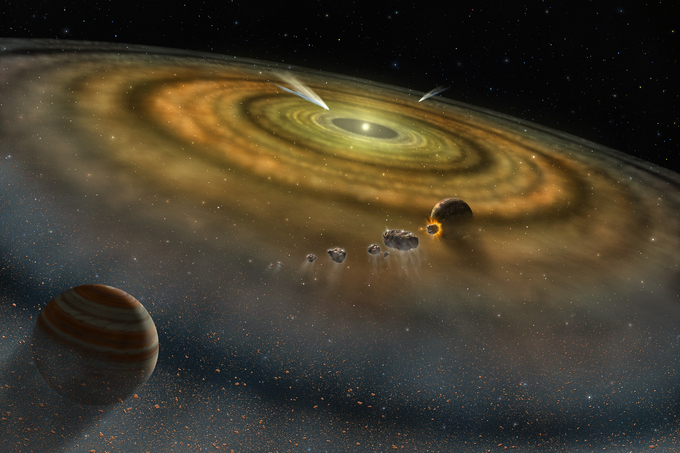 The Origins Space Telescope will probe the history and origins of the Solar System through a sensitive survey of 1000s of Trans Neptunian Objects (TNOs).  TNOs are some of the Solar System’s most primordial objects whose orbits match the scales of most observed disk structures in other planetary systems. Due to their relatively small size and large distances, their physical parameters are still poorly constrained.  OST will be able to characterize these small bodies to sizes of  < 10 km at distances of > 100 AU.

OST will enable an understanding of the role of magnetic fields and turbulence in star formation, connecting galactic-scale physics to protostellar cores.  Origins will allow high-resolution, high-sensitivity, multiwavelength, wide-field observations of (1) dust polarization in the FIR (at the peak of the dust SED, where dust is generally optically thin), which, unlike background starlight polarization, allows access to all spatial scales of magnetized turbulent flows with uniform coverage; and (2) well-resolved maps of high-energy FIR spectral lines, in particular of [CII] and the CO Spectral Line Energy Distribution (CO SLED), to trace turbulent shocks and to directly measure both energy injection scales and energy losses in the neutral ISM. The combination of spectral line and thermal dust polarization data will allow us to probe material of different densities and temperatures, producing tomographic maps of the magnetic field in the turbulent ISM over entire molecular clouds.  At right is a a map of inferred magnetic field lines (texture) and total intensity dust emission (color scale) in the Vela C molecular cloud, from Fissel et al. 2016. This map, made with BLASTPol (the Balloon-borne Large Aperture Submillimeter Telescope for Polarimetry), is the most detailed magnetic field map ever made for a GMC forming high-mass stars.

Understanding the Multi-Phase ISM in Galaxies 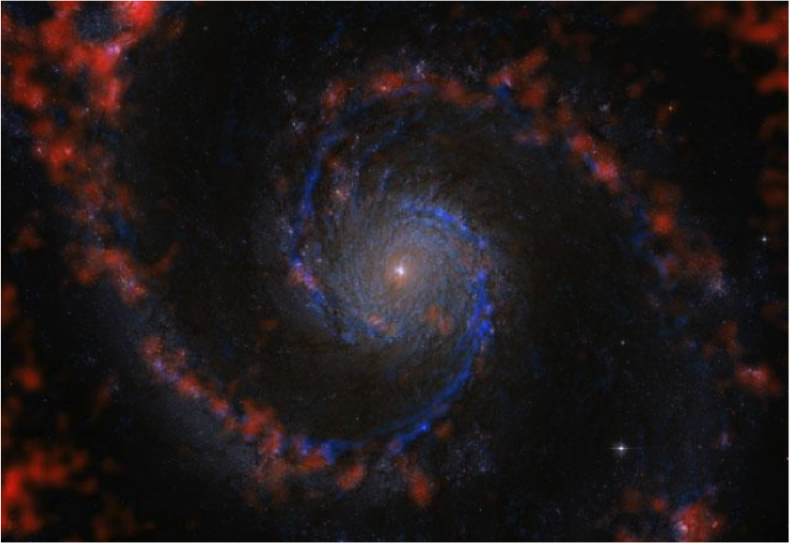 OST will establish the interstellar processes that maintain a multi-phase ISM, regulate the transition of gas between phases, and form molecular clouds.  Spectroscopic measurements in the mid- and far-IR are critical for measuring the most important cooling lines (CII, OI, OIII, NII) as well as the H2 rotational lines at 17 and 28 μm. Imaging of line emission from galaxies allows one to evaluate these gas phases with respect to kpc scale structures such as spiral arms and stellar bar potentials, while reconnaissance in the Milky Way provides a high spatial resolution view of phase interactions.   At left is a color composite of M51 in H2 (red) and H-band (blue) from PAWS (PdBI Arcsecond Whirlpool Survey).  High spectral resolution spectra with OST will allow us to separate closely spaced velocity components in the Galactic plane while also providing key velocity information that can constrain theories of molecular cloud formation.

High-resolution spectroscopy is essential to identify gas motions in the environments of developing molecular clouds, which are highly extincted and impossible to study in the UV or optical. The FIR atomic fine structure lines are the major coolants in the neutral atomic medium, and in addition to being readily observable, are the best probe of the transitions between atomic and molecular gas phases in the ISM. 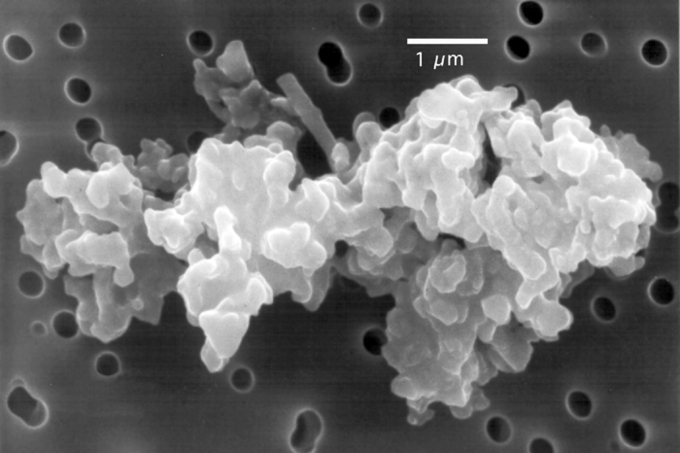 Astrophysical dust comprises less than one-hundredth of one percent of the baryonic mass of the Universe, yet approximately one-half of all energy radiated by stars and accreting black holes over its history has been reprocessed by dust to long wavelengths. Dust shrouds the most intense regions of black hole accretion and star formation, and, as it is comprised of condensable species like C, Si, Fe, and O, is a sensitive tracer of the abundance of heavy elements. Yet the origin of the large dust reservoirs now being found in galaxies at z > 5, is unknown, with possible explanations ranging from ultra-high mass supernovae, rapid ISM growth, or fast-evolving massive AGB stars. Studying the broad spectral dust features in the mid-infrared (3–30μm) from a widely drawn sample of early galaxies is the only way to provide critical and unique information on dust origin, composition, and properties like grain size distribution, and the underlying gas metal content. Due to the very different expected dust compositions and mass yields of low metallicity PopII and PopIII stars, dust signatures can directly probe the properties of the earliest phases of star formation.

OST will allow alow us to measure the mid-infrared dust features in galaxies to z~10 and beyond, providing a direct measure of the dust content and physical conditions in the dusty ISM of the earliest galaxies.  Deep spectroscopy of several hundred redshift-selected sources with luminosities 1012 - 1013 solar luminosities will enable us to track the onset of dust production and explore its progenitors. Blind spectral surveys centered on the brightest dust emission features (e.g. PAHs at 7.7 and 11.3μm) will also provide large samples with well-measured, independent redshifts, even for strongly UV/optical-obscured galaxies. Since bulk dust features are broad, the required low spectral resolving power (R=50–100), provides exceptional background-limited sensitivity.

Warm H2 and the Birth of Galaxies 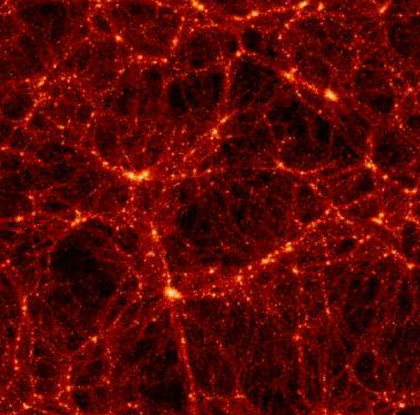 A key to understanding the formation of the first galaxies and development of large-scale structure is tracing the cooling of gas into dark matter (DM) halos at early times. During the Universe’s first billion years, the initial collapse of gas onto the first galaxy-sized halos is enabled through a mix of pure-rotational H2 and metal fine-structure lines, depending on the degree of enrichment.  Emission from pure rotational H2 lines redshifted into the far-IR can provide a direct measurement of the strength of cooling and the dissipation of mechanical energy in the gas as it collapses before the onset of star formation.  This emission will be extremely difficult to detect, but is within the reach of Origins.

The rotational H2 lines will directly trace energy dissipation in the first collapsing structures. Gas accumulating in DM halos may also show inhomogeneity in metal enrichment, and measuring the relative strength of H2 versus the generally brighter metal fine-structure cooling would be an direct observational step towards testing models of early galaxy formation in the dark ages.  The rotational H2 lines fall exclusively in the far-infrared for objects up to z ~11. OST provides an exciting opportunity to detect this emission from the first collapsing structures. No other facility is capable of detecting direct H2 emission from turbulent, warm molecular gas in the early Universe.

MHD shock-models of molecular gas in low-z systems show how H2 emission can be boosted relative to metal lines, even in strongly metal-polluted gas. Models of shocks in low-metallicity gas will be relevant to gas cooling at high-z. Measuring the H2 and important fine-structure lines ([FeII] 25.9μm and [SiII] 34.8μm) together in one spectrum will be a powerful test of primordial galaxy-formation models.  To amplify the signals to a detectable level for OST,  we will need to target lensing caustics in strong lensing clusters to gain amplifications of 5-6 or more. At z~9, we expect to find several halos (~1 per 1000 Mpc-3, Mhalo=1010 solar masses), and many more at lower z. Detection of gas falling into such halos is detectable with Origins in very deep surveys at z < 9, especially if there is additional boosting of the signal from shocks associated with the formation of structure.