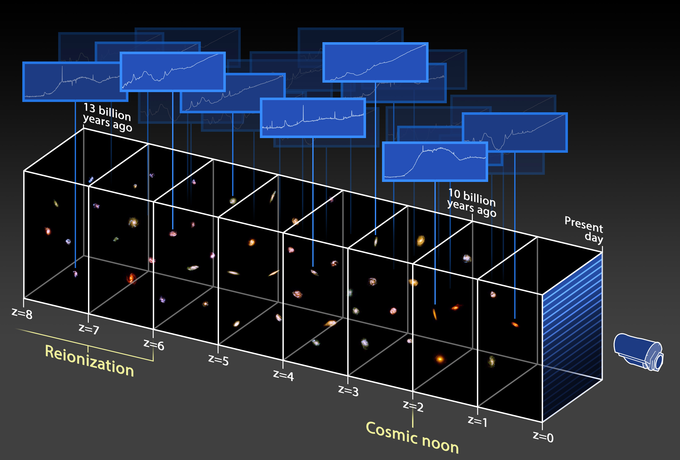 Mapping the Universe in 3D: We have developed a movie that shows how Origins will scan the sky with the Origins Survey Spectrometer (OSS) and build up 3D maps of galaxy evolution as a function of redshift. To run the movie, click on the snapshot on the right. By making deep and wide area spectral surveys, Origins will trace the co-evolution of galaxies and supermassive black holes, discover and measure galactic feedback, and chart the rise of metals over more than 95% of cosmic time. These science cases are discussed in more detail, below.

The Co-Evolution of Stars and Black Holes in Galaxies 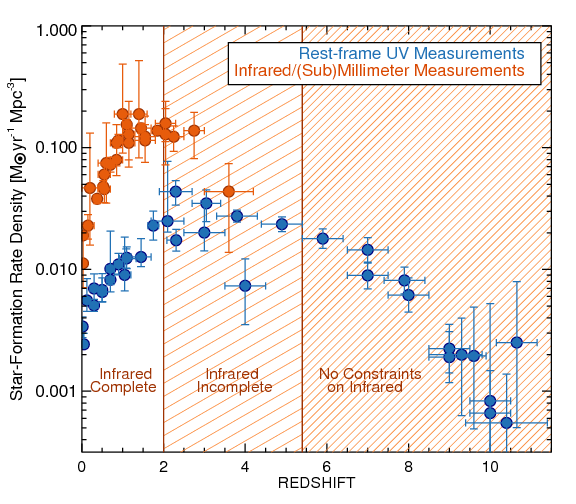 With deep and wide spectroscopic surveys, Origins will find and characterize how galaxies and super-massive black holes grow over cosmic time.  The deepest infrared surveys to date have revealed that (1) the bulk of star formation in galaxies occurred between redshifts of 1 < z < 3, with a relatively sharp drop at z < 1, and (2) the vast majority of the UV light ever produced by young stars was re-processed by dust into the far infrared (Madau & Dickinson 2014).  Because of the limitations of previous surveys, the star formation rate density (the number of stars produced per unit time, per co-moving volume) at z > 3 is unconstrained in the IR. Origins will provide the first accurate measure of the star formation rate in galaxies at z > 3 in the infrared, with sufficient large samples to determine the effects of environment, AGN power, and environment.  The plot at right, adapted from Casey et al. (2018), shows the current global star formation rate density as a function of redshift – note the lack of infrared data for z > 2, and the vast discovery space that can be filled in with Origins. 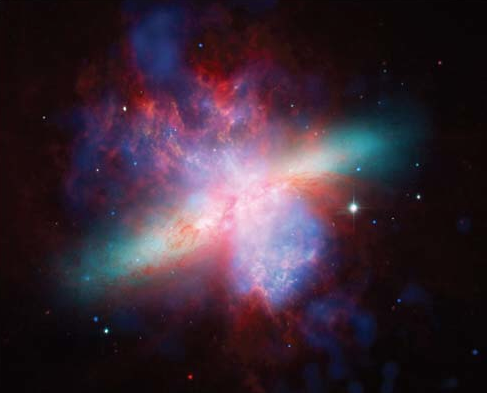 Galaxies are not closed systems - they accrete gas through mergers and directly from the cosmic web, and they expell metal-enriched gas via galactic fountains and winds. Galactic outflows are prime examples of feedback, powered by star formation and growing supermassive black holes. Feedback has an important role in a number of galaxy observables, such as the galaxy mass function and the enrichment of the interstellar and circumgalactic medium. Feedback is seen in local starburst galaxies, AGN, clusters, and high-redshift star-forming galaxies.  At right is a composite image of the nearby starburst galaxy, M82, in starlight (green, from Spitzer), warm ionized gas (red, from Hubble) and hot gas (blue, from Chandra) showing the starburst-driven wind escaping along the galaxy minor axis. The sensitivity of OST will allow us to detect extraplanar gas and dust emission down to levels of 0.1 Msun/pc2 of H2 or HI, quickly sampling the circumgalactic environments in hundreds of galaxies out to distances of 100 Mpc or more. 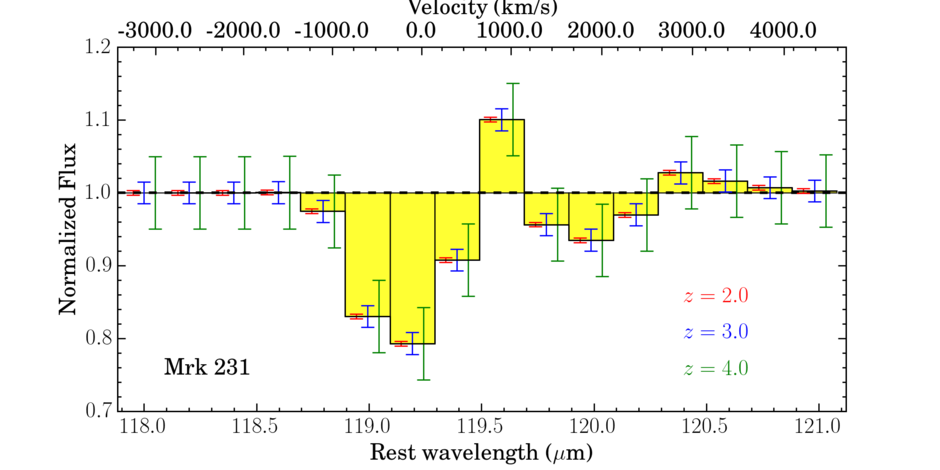 The nature of feedback on all scales is one of the key open questions in Astrophysics today, and a main goal of Origins is to characterize galactic feedback over cosmic time and across the spectrum of galaxies and environments over which it occurs. With Origins we can detect dense molecular gas currently outflowing from the centers of active galaxies, as well as the faint, diffuse gas and dust carried out from galaxies by powerful winds in the past. Origins will sample thousands of galaxies to z~4, detecting blueshifted absorption lines from transitions of OH and H20 in the far-infrared. At left is a simulated OST/OSS 1hr spectrum of the powerful molecular outflow in Mrk 231, as seen at z=2, 3, and 4. These fast, strong winds will be easily measured well past the peak in the galactic star formation rate density (SFRD), allowing us to sample feedback at the peak SFRD at z~2 and its role in quenching galaxies at later times. These broad wavelength coverage, unprecedented depths and large un-biased galaxy samples studied with a combination of fast spectral mapping, and deep follow-up spectroscopy, will enable sensitive tests of models of the chemical enrichment of the IGM and the baryon cycle in galaxies.  Simulation courtesy of A. Gowardhan (Cornell). 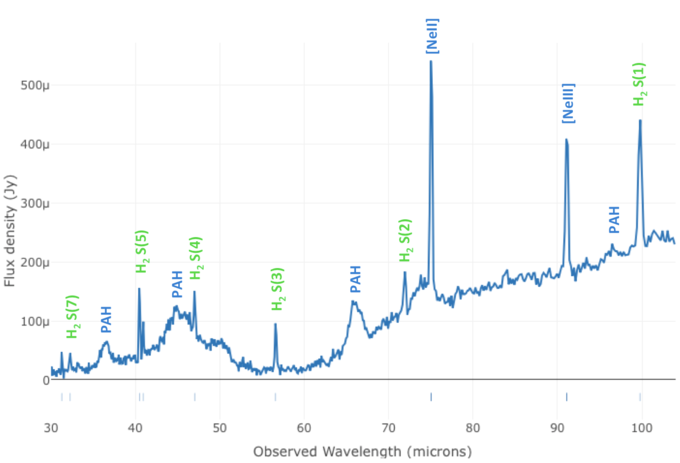 Origins will easily be able to identify galaxies with strong shocks from feedback directly from their infrared emission line spectra.  At right is a simulated ULIRG at z=5 observed with OST/OSS in a 1hr integration. This galaxy has strong H2 emission lines (green), similar to what is seen in the nearby ULIRG, NGC 6240.  These types of spectra are signposts for galaxies with feedback from supernovae and active nuclei, because the H2 lines from warm molecular gas are extremely bright when compared to the PAH features - much brighter than could be produced by young stars alone.  In the planned OSS Deep survey, Origins will be able to quantify the numbers of such galaxies as a function of environment, luminosity and starburst and AGN power, providing the first unbiased census of feedback within the population of infrared galaxies into the epoch of reionization.

The Rise of Metals 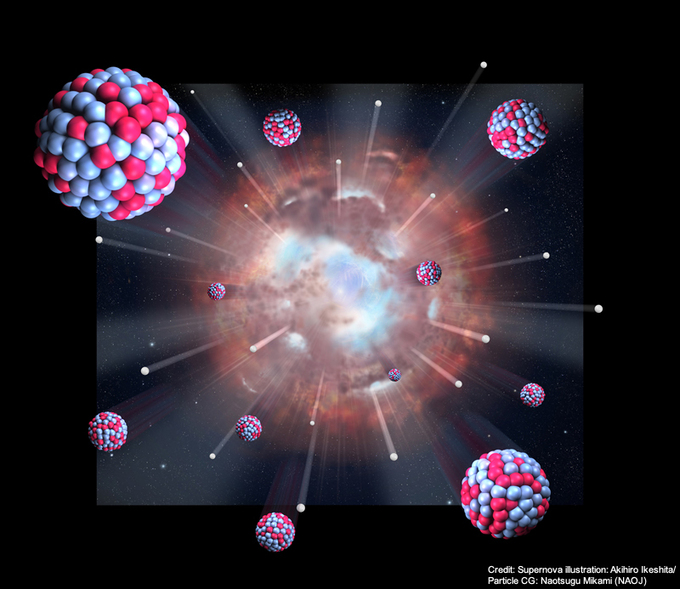 Metals such as carbon, oxygen, and  nitrogen serve important roles in the interstellar medium, the formation of stars, planets and for life itself. Yet, the Universe did not start with the abundance of elements that we have today. Before the formation of the first stars and galaxies the Universe was predominantly hydrogen and helium with traces of lithium, beryllium and boron. It remains an outstanding question as to how and when the Universe was enriched with metals from the Big Bang until today.

OST will study the evolution of metallicity in the Universe via the mid- and far-IR fine structure emission lines. Historically, studies of metallicity have utilized optical indicators that suffer suffer from dust extinction and degeneracies that lead to systematic variations between indicators up to factors of five! By surveying the IR lines— which do not suffer from dust extinction or the degeneracies of the optical indicators—within thousands of galaxies between 1 < z < 6, OST will accurately trace the rise of metals across cosmic time. 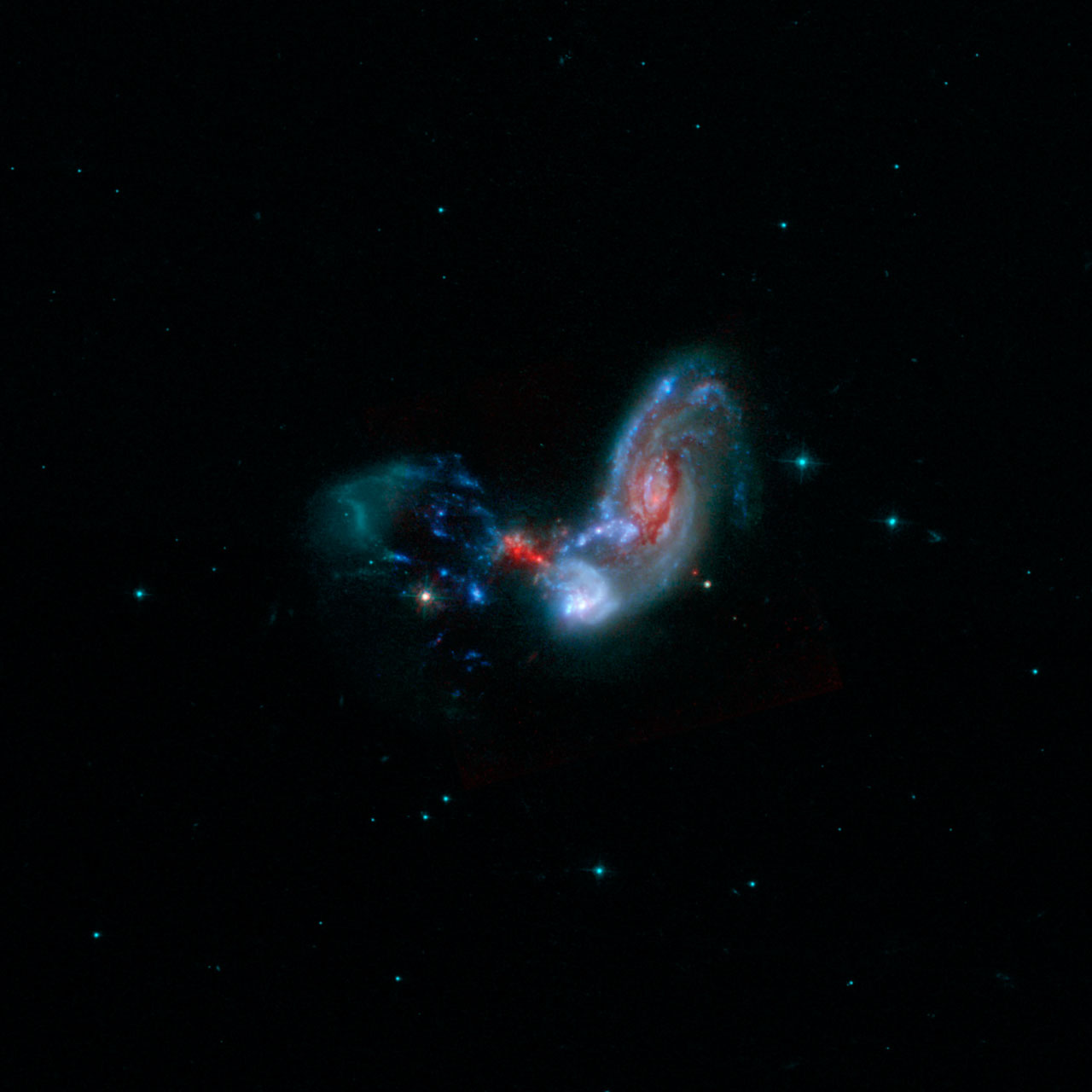 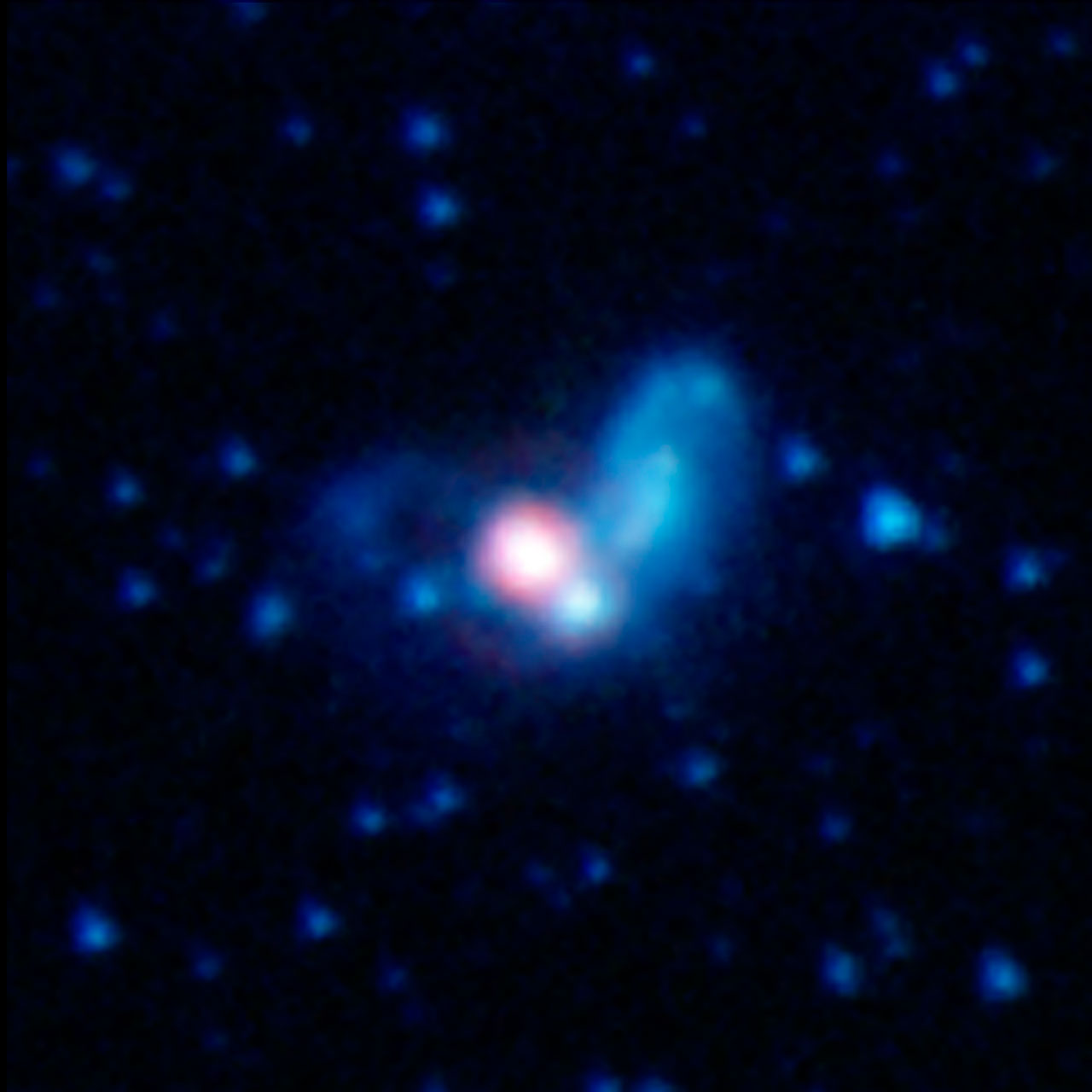 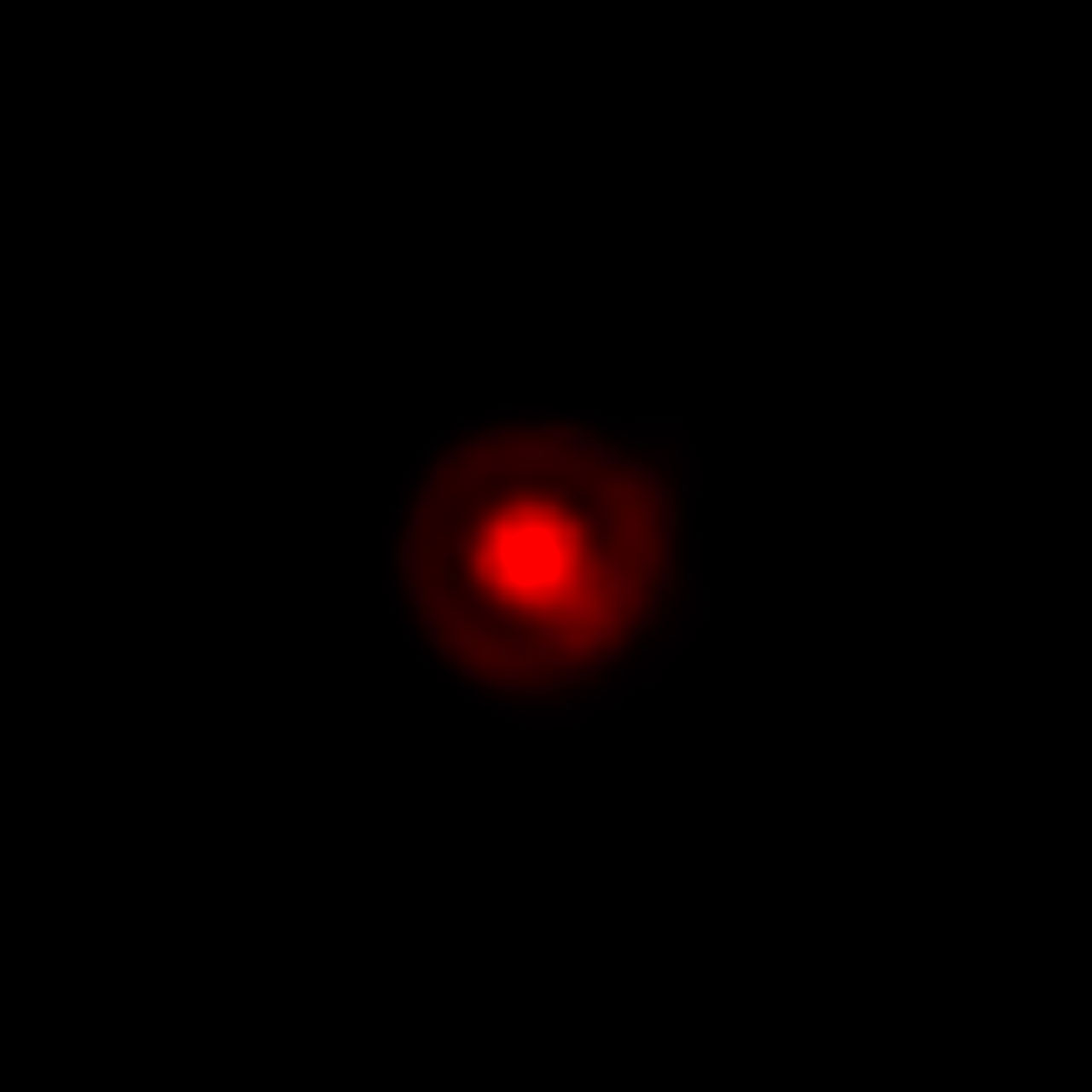 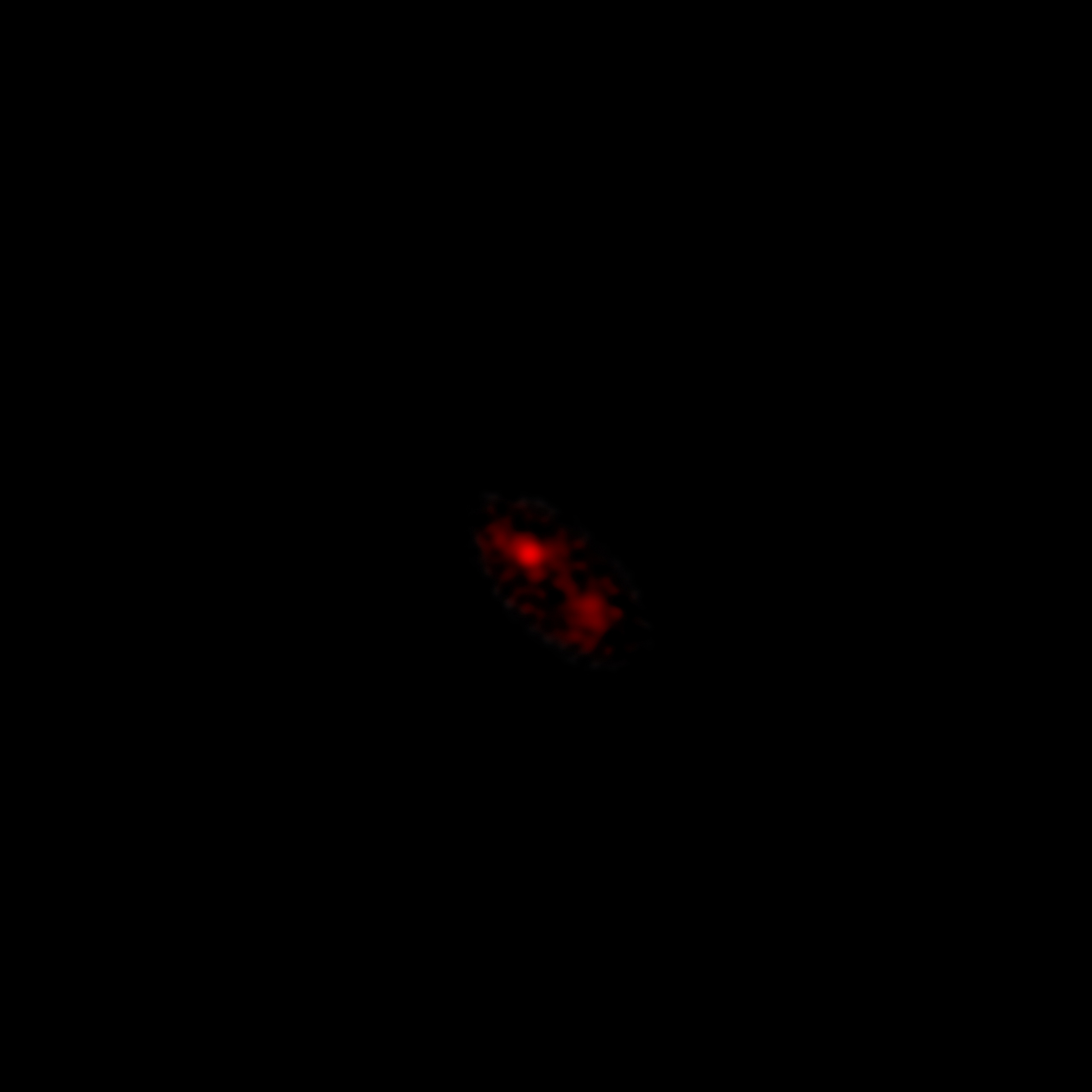 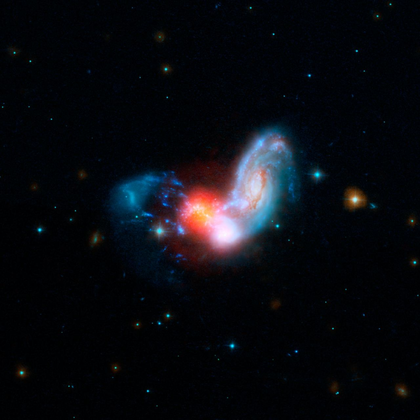 An example of the power of the infrared to reveal the hidden side of galaxy evolution is dramatically revealed here in this image of II Zw 096, combining observations from NASA's Spitzer and Hubble Space Telescopes. Here, the collision of two spiral galaxies has triggered a burst of star formation, still shrouded in its dusty cocoon, which lies between the merging nuclei. Moving the slider to the right highlights first the Spitzer/MIPS 24-micron data, then a simulated mid-infrared image at the spatial resolution of OST (based on a high-resolution thermal radio image from the JVLA courtesy of L. Barcos-Munoz). This powerful starburst, which produces nearly 700 billion times more energy than our Sun, is also very compact, with a size which may be as small as 800 light years across. This makes the energy density emerging from the starburst in II Zw 096 nearly an order of magnitude larger than the starburst in the overlap region between the Antennae galaxy merger (NGC 4038/4039). In the infrared, the II Zw 096 starburst far outshines both galactic disks, with more than 90% of the luminosity from the entire system emerging from the compact, red source in the center. The Origins Space Telescope will be more than 100 times more sensitive than Spitzer in the mid-infrared, with ten times the spatial resolution, and reach depths that are hundreds of times fainter, in one second, than are seen in this simulated image.

II Zw 096 lies at a distance of about a half Billion light years from Earth in the direction of the constellation, Capricorn.  In this combined image, Hubble's far-ultraviolet and visible light at wavelengths of 0.15 and 0.44 microns is shown as blue, and the near-infrared light at 0.9 microns is cyan. Spitzer's infrared light at 3.6-24 microns is blue through red. The simulated 30 micron, high-resolution, OST snapshot image of II Zw 096 is also in red, at the far right. For more information on these and other multi-wavelength observations of II Zw 096, see Inami, H., et al. 2010, AJ, 140, 63 and Barcos-Munoz, L. 2017, ApJ, 843, 117.