Toward a Census of Water Vapor in Protoplanetary Disks 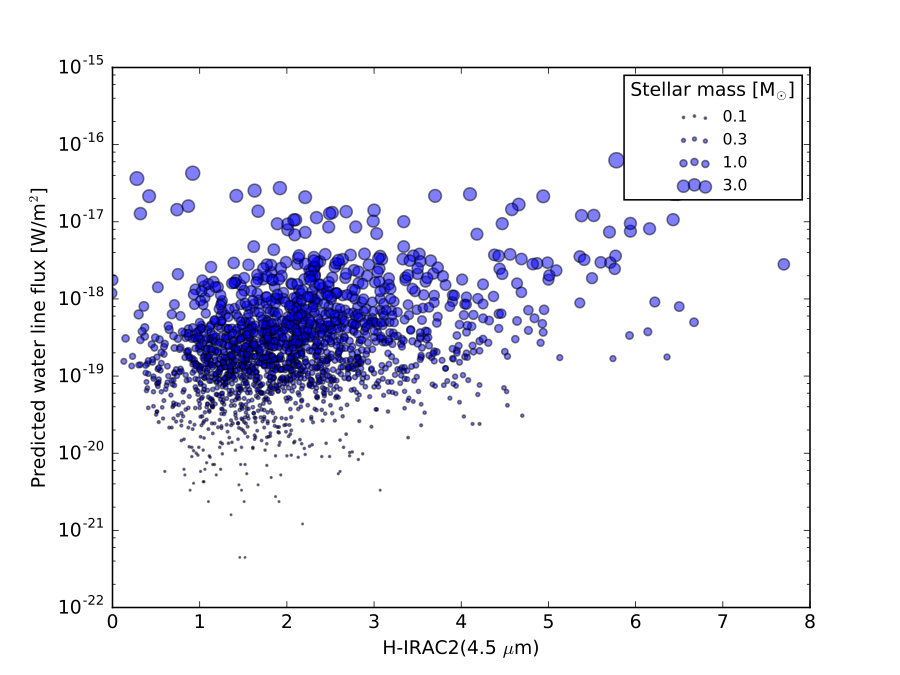 We do not know whether protoplanetary disks are universally able to seed their planets with water and other volatile species critically for origin of life, as we know it. To understand the diversity of planet-forming disks and their connection to exoplanetary composition and the availability of water to potential biospheres, it is critical to obtain a census of the content of water in large samples of protoplanetary disks around stars of all masses, and for a wide variety of environments. While we know that many disks have abundant water, a full census will finally place the Solar Nebula into a broad Galactic context.

Using sensitive, high-resolution mid- to far-infrared spectroscopy, OST will create a comprehensive Galactic census of the water content in up to 1000 planet-forming disks around young stars of all masses at disk radii of 1-100 AU. This goal will definitively answer the question of whether water is universally abundant and available as an ingredient for habitable planets.  At left is a plot of the predicted 78.4 micron water line flux for the Orion cluster.  The line fluxes are scaled by luminosity and distance to match observed infrared photometry from Spitzer/IRAC (Megeath et al. 2012).  Sensitivity to water lines to 10-20 - 10-21 W m-2 will allow for complete water inventories of disks out to 500 pc. 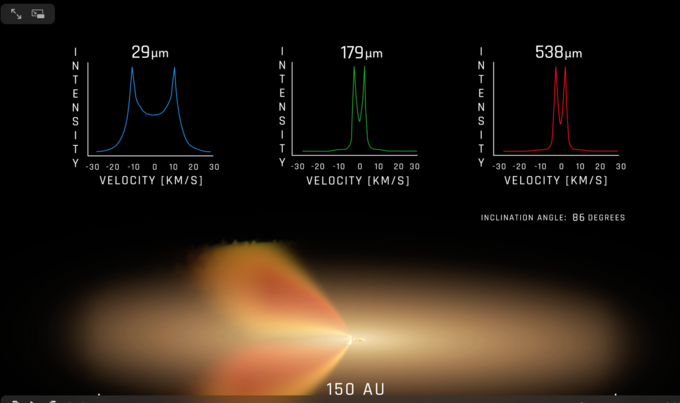 PPD Water movie: We have developed a movie that shows how observations of water lines at high spectral resolution can trace the structure of a protoplanetary disk. To run the movie, click on the snapshot on the right. Three water lines are illustrated, tracing different gas temperatures:

1) The 29 micron line tracing warm gas out to the snow line.

3) The 538 micron ground-state line. This is the traditional tracer of the coldest water reservoir, but is somewhat similar to the 179 micron line, for which OSS has much better resolving power

The movie moves through velocity space, showing the parts of the disk traced by each line. The 29 micron line outlines the location of the snow lines. Finally, the movie illustrates how the water lines change for different disk inclinations.   The simulation shows that multiple water lines are needed to understand the distribution of water at all temperatures in the disk, and that high spectral resolution with Origins allows us to do this kind of disk “line tomography”.

Comets and the Delivery of Water to Earth

Origins will probe the thermochemical history of comets and the possible delivery of water to Earth.  By conducting a statistical study of volatile isotopes in ~100 comets (from both reservoirs: Oort Cloud and Jupiter Family), a better understanding of the delivery of volatiles to terrestrial planets may be revealed.   There has been a limited number of measurements of D/H in comets, two of which have suggested a D/H ratio comparable to Earth’s oceans.  Origins will be able to measure this ratio in much fainter and less active comets than current facilities can reach. 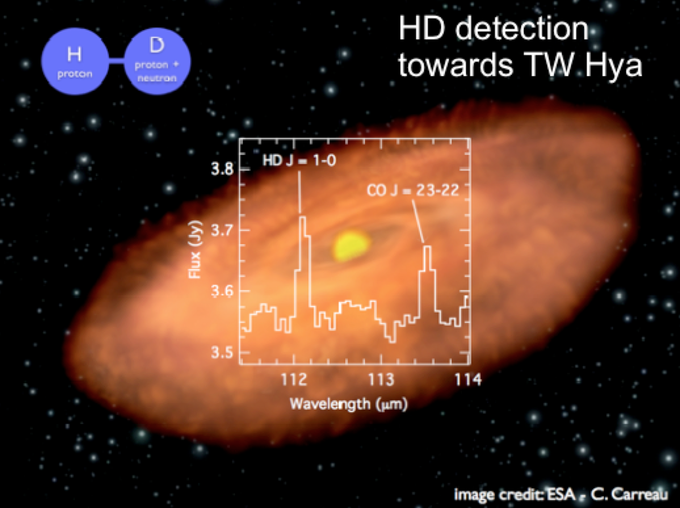 The most fundamental quantity that determines whether planets can form is the protoplanetary disk mass. Previous estimates of disk masses use the thermal continuum emission of the dust grains or rotational lines of CO as indirect, and highly uncertain, tracers. Herschel demonstrated that the fundamental rotation transition of HD at 112 microns can be used as a direct tracer of disk mass in a few cases. The atomic deuterium abundance relative to H2 is well characterized and the lowest rotational transition of HD is a million times more emissive than H2 for a given gas mass at 20K. A survey of HD emission with OST can expand measurements of accurate disk masses from the current ~3 systems up to 1000 disk systems. This will determine the disk gas lifetimes as well as the efficiency with which disks convert their masses into planetary systems.  At right is an artists concept of the TW Hya proto-planetary disk with the Herschel/PACS far-infrared spectrum overlayed, showing the detection of HD (Bergin et al. 2013).